The Gothenburg Book Fair (A brief guide to mingling, Part 2)

I went to the Gothenburg Book Fair today. The book fair is a yearly event. I go to look for interesting books, and to meet interesting people. Let's dive right in and see what happened:

Erik Lundh, a friend of mine, and I had agreed beforehand to meet at the fair. Anna Sigvardsson, the photographer I met at the mingle last week and I had also decided to meet and have a cup of coffee at the fair.

When I arrived, I had plenty of time before meeting either Erik or Anna, so I did what everyone else at the fair does: I went looking for anything interesting that might catch my eye.
Pretty soon I found myself talking to Kersti Ingeborn at the Mediapool  School Library Service. We found we had some interests in common. In addition to working at the School Library Service, Kersti is also engaged in health care. After talking briefly, I promised to email her a link to this blog post, and moved on.

One of the nice thing with the book fair is that it is an opportunity for me, as a writer, to meet and speak with other writers. Thus, when I saw Stefan Olsson at Universe Imagine, I went over and talked to him.

Stefan and I swapped writing and publishing experiences for a couple of minutes. Then Stefan suggested that we should swap books, so we did.

It is not fair to hog the time of someone working at the fair, so I told Stefan I would email him a link to this blog post, and moved on.

Astute readers may notice a pattern developing here. I follow up the connections I make, and I offer a reason to continue with some sort of contact. I only do this when I believe there really is some reason to keep in touch. The decision to continue the contact, or not rests entirely with the other person.

As I wrote in  A brief guide to mingling, the purpose is not to sell or advertise anything, but to find and connect with interesting people.

Of course, if you have agreed to meet two people at a book fair that lasts all day, they will arrive within a few seconds of each other. Erik beat Anna by about 30 seconds. Erik and I needed to talk about a few work related matters, so we did. Then I went to have a cup of coffee with Anna.

You wouldn't believe the size and weight of the backpack I had lugged around all morning. Putting it down, having a cup of coffee, and talking photography and books was a relief you cannot imagine. Unless you to carry around a similar backpack, of course... Thanks Anna!

After meeting with Anna, I hooked up with Eric again. Eric mentioned he wants to meet with a photographer, so I fired off an SMS to Anna to see if she would be interested in meeting Eric. She was, so I helped Eric and Anna set up a meeting. The cellular phone network was a bit overloaded, so we did everything by SMS. SMS wasn't altogether reliable either at the fair, but it worked out OK.
Eric had a meeting with Jens Fredholm at Studentlitteratur. Eric is a co-author of a recently published book, The System Anatomy. Jens is one of Eric's main contacts. Eric invited me to an after-the-fair for-people-in-the-publishing-business mingle, and off we went to see Jens.

I have met Jens once before, but that was briefly a year ago, so Eric re-introduced us.

It was nice meeting Jens again. Eric, Jens and I had an interesting talk. We decided to go and eat something, and that is when I suddenly saw Alf Fyhrlund and his wife Saga.

Alf is the statistician I wrote about in  A brief guide to mingling. Introductions were made all around, and business cards were exchanged. (Just so you know: Alf and I will go to a BNI meeting together on Tuesday.)

After that, the only new connection I made the rest of the evening was with a humungous shrimp sandwich. (Thank you Jens.)

Let's update the network diagram from  A brief guide to mingling: 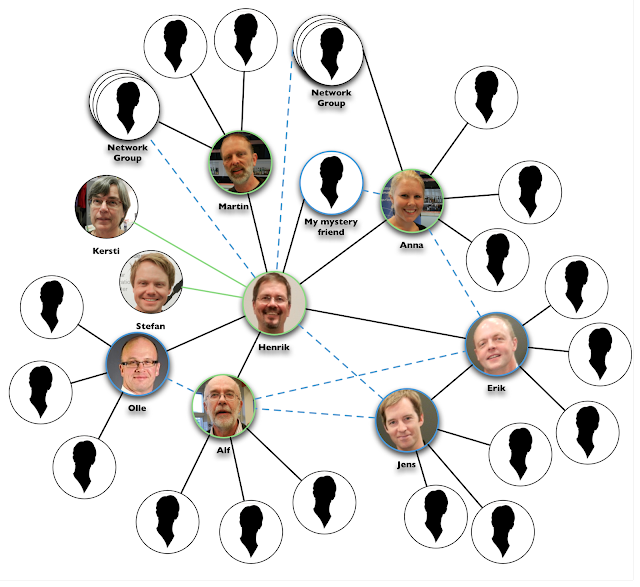 There are new connections, and some old ones have been maintained (Jens and me). One thing I like about having a diagram like this, is that the people in the diagram are likely to read this post and see it. That increases the probability that they will discover a reason to connect.

If one is steeped in Command & Control culture, it is easy to believe that one should somehow be in control, or "own the network". That does not work. Nobody owns the network. I belong to the network. So does everyone else in the diagram.

Thus, I am not at the center of the network, even though it may look like that in the diagram. It is just that the diagram is drawn from my perspective, and contains the connections I know about.

Draw diagrams from the perspectives of Eric, Jens, or Anna, and they will look quite different, but they will be just as valid. (Try drawing a complete diagram, and you will end up with a mess and go bonkers in the process.)

The network will change today, like it changed yesterday. I know Alf and Olle are likely to talk to each other, and I know Anna and Erik will too. I will ask them how it went, because these are people I like, and I have an interest in their connections working out for the best. Other things will happen too, lots of connections will be made I don't know about, and never will know about. That is as it should be.

What is of interest to mingle event goers is that many of the things I described here, happened because of the mingle event, Göteborgsminglet, but they did not happen at the event. Mingle events are powerful because they generate sparks that may ignite something larger and longer lasting.

Oh, perhaps I should mention: The fair itself was fun too. Lots of interesting books.
Posted by Kallokain at 09:08