Fugue for Norepinephrine, Dopamine, and Oxytocin 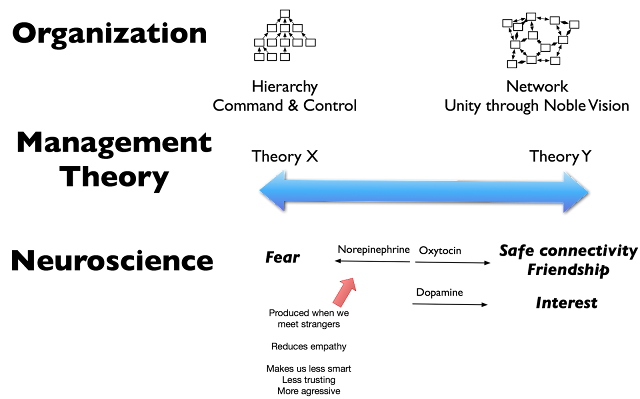 I have written before about two very different ideas of management, Theory X and Theory Y, and how they engender different organisational structures, and very different working environments.

Most of what I, and others, have written about Theory X/Y, uses the model as a basis for exploring outwards, from the individual to the organization.

I believe it is just as important to explore in the other direction, going inwards. There are several paths open to inwards exploration: psychology, philosophy, religion, ethics, but in this article, I’ll take a short but brisk walk along the path of neuroscience.


Theory X and Y represent endpoints on a spectrum of attitudes managers may have towards the people who work for them. Theory X says people are basically lazy and motivated by self-interest and external rewards only. According to Theory X, people will always seek to maximize the monetary rewards they get, and minimize the work they put in.

As a consequence, workers must be told what to do and how to do it. They must be monitored closely to ensure that they don’t shirk their work.

Theory Y, on the other hand, says people can be highly motivated, that they are both able to, and desire to, act responsibly.

As a consequence, workers can, when the circumstances are right, be self-directed. They are able to self-organise and can and want to take responsibility. They are also able to figure out how to do their own work.

As you can imagine, a Theory X manager will create a very different work environment from a Theory Y manager.

Theory X leaders and managers create tightly controlled, hierarchical organisations. Authority is delegated as little as possible. Mistakes are strongly discouraged. Punishment as a means of control is common.

Good examples of Theory Y organizations would be Gore & Associates, the Virgin Group, Zappos, Business Network International, and Semco. A bit surprisingly, unless you are a strategy and organization buff, some military organizations exhibit strong Theory Y characteristics.

Theory Y companies are more pleasant to work for than Theory X companies. No surprise there.

However, there is a very big problem with this picture of X and Y organisations:

Why, if Theory Y companies are so superior, do most companies lean towards the X end of the spectrum? Why don’t we see more, many, many more, Theory Y organisations?

Here are the reasons offered most often:


I believe both of those reasons are valid, but I also believe there is a piece missing in the puzzle.

Here is my hypothesis, and I do want to stress the word hypothesis:

Norepinephrine and Dopamine – The Fear Cocktail 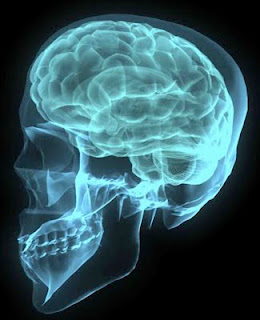 We do know from neuroscientific research that when people first meet, the default response of the human brain is a threat response. If there are no indications that the person we meet is friendly, a tiny dose of norepinephrine (noradrenaline), is released into the brain, making us ready for flight, or a fight.

Under normal circumstances, we are barely aware of our own threat response, and it is quite easy to reduce the norepinephrine level to normal: A smile, a handshake, a bit of small talk to find common some interest (the weather will often do) is often enough.

When we see that smile, shake that hand, and find a bit of common ground, the brain does more than reduce the norepinephrine level. Perhaps most importantly, it releases another chemical, oxytocin. Oxytocin makes us feel friendly, and increases trust. We’ll get back to oxytocin.

Our brains release norepinephrine in situations where the brain judges fear to be an appropriate driver of behavior, for example if you are stalked by a lion, or a looming project deadline.

There is another chemical that is also released when you encounter something stressful or dangerous, dopamine. Norepinephrine increases your stress level, and dopamine makes you interested.

The norepinephrine-dopamine cocktail isn’t necessarily bad. Without it you would not get out of bed in the morning. Nor would you run from a charging lion, or try to fight it. There is actually a kind of healthy stress, called eustress, which is caused by the right mix of norepinephrine and dopamine.

The problem is that our brains have a tendency to overdo the dosage in many situations. The reason for that has to do with our evolution: Being easily scared had a lot more survival value 100,000 years ago than it has today.

Projects used to be fairly short, with clear goals: Hunt the mammoth, kill the mammoth, eat the mammoth. That is what the brain’s drug dispensing system has evolved to cope with.

Today, projects are longer and goals harder to define: Spend a year building a software thingy that makes the customer happy.

Often, there is no discernible goal, just do the same thing today that you did yesterday. Repeat until retired, fired, or just too tired.

In these situations, the brain continues to produce norepinephrine and dopamine at elevated levels for long periods of time. This is not healthy.

Consider an entrepreneur trying to build a new company, or a manager dealing with problems in a department. These are very demanding activities with uncertain outcomes. Scary!

Picture in your mind how norepinephrine and dopamine permeat through the brain...

There is no wonder that most people opt for a Theory X approach in this situation.

If you describe a Theory X organisation and a Theory Y organisation, and ask people which kind they would like to work for, most people will pick the Theory Y alternative.

Thus, it is of interest to understand a bit more about the chemical makeup of a Theory Y entrepreneur or manager.

We are shooting for a high degree of motivation, which means we do need to hit the optimal, eustress, levels of norepinephrine and dopamine.

We also need a friendly atmosphere, so lets add a good dose of oxytocin to the mix. (In the book Your Brain at Work, David Rock writes about a scientific experiment where researchers found they could increase the level of trust in a room by spraying oxytocin in the air. Let’s not go quite that far.)

There it is: The norephrine-dopamine-oxytocin fugue. Hit the right levels, and people will fear less and trust more. Thus, we have the emotional foundation of a Theory Y organization.

Even more interesting, there are plenty of things we can do to influence the levels of norepinephrine, dopamine, and oxytocin in ourselves, and in other people.

More about that in a near-future article.
Posted by Kallokain at 12:43 No comments: