I posed what I believed to be an innocuous problem for the kanbandev group at Yahoo and inadvertently started a bit of a row. The problem was as follows:

In a hotel restaurant there is a table with a juice dispenser. Next to the juice dispenser is a stack of trays with glasses. Sometimes the glasses run out, and a queue of customers build up. What is the best way to prevent glass outages?

I had a solution, but I wasn't happy with it. It involved using a photocell to detect when the glasses were in danger of running out. One complication was that the serving personnel could not easily see if the glasses were running out. The table with the juice dispenser is in an alcove. The, usually very busy, serving personnel move along paths that make it difficult to see the trays. If there is a queue of people waiting for juice, they obscure the trays, and any simple kanban mechanisms. Of course, if the arrival rate of thirsty restaurant guests is great enough, a queue may form even if there is plenty of juice and glasses.

I quickly got several suggestions on how to implement various kanban mechanisms to replenish the glasses. All of the suggestions were good, but only a few will work in the environment at the restaurant. (Or so I believe. I've been there only once, and it was awhile ago.) This was what I had expected, but one member of the group told me that my problem was a distribution problem, not a process scheduling problem, and therefore it would be more appropriate to ask the question in another group.

This sparked some heated debate. For once, I didn't wade into the thick of it. There were some big guns on both sides of the debate. One thing that became clear to me, is that there was a difference of opinion about some of the fundamentals, like what a pull system is, when to apply kanban or DBR mechanisms, and stuff like that.

I like diagrams. Mailing lists are not diagram friendly, so I thought I'd blog about my point of view. It allows me to describe the system under discussion with a diagram like this: 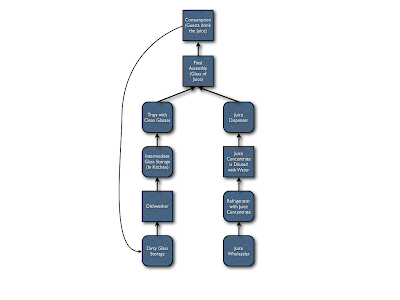 As you can see, the system has two legs, a glass leg, and a juice leg. (Some of it is conjecture. For example, I do not know if the restaurant dilutes concentrated juice, but it seems a reasonable supposition.)

The basic conflict, as I understand it, is described in the following evaporating cloud: 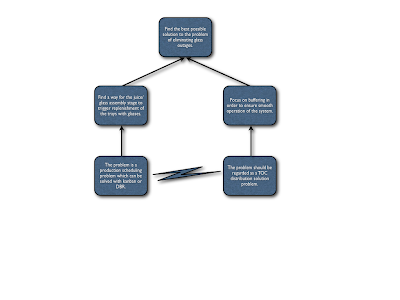 I asked about the reason for kanban not being applicable, and got the answer that the system is not a pull system because the operator of the system - the restaurant management - is not able to control the arrival rate of the work - the customers who want a drink of juice.

This seemed strange to me on two counts:
When cracking a cloud, it is important to be able to prove assertions like the two I made above. I checked several references, but these will be sufficient to prove my point:

For definitions of the term pull system, see

For explanations of the TOC distribution system approach, see
So claiming that the problem isn't a kanban problem because the system under discussion isn't a pull system, does not hold. The system is a pull system, because the act of using glasses should trigger replenishment of the trays. The problem is that the current mechanism for doing so, visual inspection of the trays, is too unreliable.

Maybe there is some other reason to consider this a distribution problem? Well, distribution problems are primarily about sizing, composing, and placing buffers. The TOC distribution system is based on two ideas:
Would such a solution be of help? No. The primary problem here is not where to put buffers. Increasing the glass buffer would not help, unless the buffer is big enough to last through breakfast. Even then, the restaurant might run out of glasses by dinner time. It is the mechanism for replenishing the buffer of glasses that is faulty. The second step does tell us to use a pull system, but it does (of course) not specify the exact mechanism to use.

On the other hand, proving that this is not primarily a distribution problem, does not prove that it is a problem that can be solved with kanban (or DBR). What does kanban provide? A visual aid that tells when to replenish a buffer in a pull system. Sounds rather abstract. How about translating it into something specific:

A visual aid that tells when to place a new tray of glasses next to the juice machine.

Much better. This is exactly what a kanban solution is. It also satisfies step 2 in the TOC distribution mechanism. Could it be that kanban systems can extend throughout the entire supply chain? Yes they can.

The kanban idea originated by studying how wares are replenished on the shelves of supermarkets. This is a classic kanban application, but it also ties into distribution problems. Supermarkets don't make anything, they are retail outlets, so they are fed by distributors.

Thus, the Kanban Juice War was caused by misunderstandings:
The evaporating cloud was broken in two places: 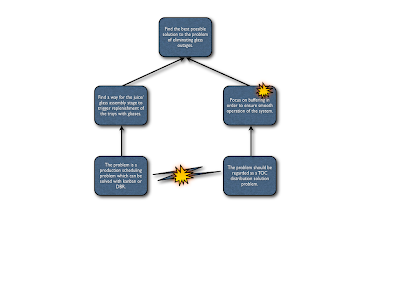 When someone misunderstands, the responsibility may lie with the sender of the message, as well as with the receiver. As I am the original sender, I may be guilty of garbling the problem description. Hard for me to say. The message seemed clear to me, but that proves nothing. If you understand the problem description it does not prove anything either. I have restated the problem, and I am using illustrations. This may make a lot of difference. On the other hand, if you don't get the the problem explanation in this post, then I have probably goofed in my original posting to the mailing list too.

The whole thing may seem like a storm in a glass of juice, but I find the Juice War interesting. If we "experts" can't agree on how to define a very simple problem like this, how are we going to sell TOC and Lean solutions to the people who need them so desperately? Why do TOC experts themselves use the Evaporating Cloud technique to resolve conflicts so rarely? Is it because the technique does not work? Or, is it because it does work very well? (I suspect the latter, probably because I find clouds very useful.)
Posted by Kallokain at 22:27 2 comments:

A Visit to BNI 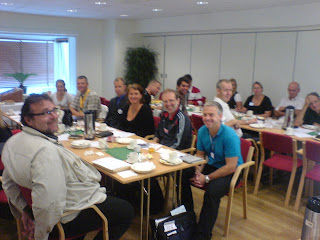 A little over a week ago, I visited BNI Spar Hotell in Gårda, Gothenburg. I was invited as a guest by Martin Richards. Last Thursday, I visited again.

BNI, Business Network International, is an international business referal organization. The idea is simple. A BNI group consists of a number of representatives for various companies. To avoid internal competition, only one company from each trade is allowed. The members have a breakfast meeting once a week, where they exchange business referals. The members also carry each others business cards, and look out for opportunities to help each other.

At my first visit, I was impressed by the well structured and tightly focused meeting. Of course, from my Theory Of Constraints perspective, Throughput is the game, and the group does deliver.

I won't mention any figures here, but on average the membership is well worth the cost. I do not know how the Throughput is distributed over the group members, but everyone I met was very happy with how their system works.

My second visit, last Thursday was even more fun. Martin is a business communications coach. He held a ten minute talk about his work, and I shot it on video. Comparing his performance with mine reminds me of how woefully out of practice I am speaking English. (Writing in English uses different parts of the brain.)

Business referral networks are interesting to me, and my clients, so I am going to delve deeper into how they work, their pros and cons, and how to optimize their performance.
Posted by Kallokain at 00:24 No comments: