A Brief Guide to Mingling

I was at a mingling event, Göteborgsminglet a couple of days ago. Such events have become an increasingly important way of meeting people and developing business relationships.

I left the event with one solid lead and more than half a dozen meetings booked. This is a marked difference from the first mingling event I went to about two years ago. When I left that first mingle, I had an enormous stack of business cards, but didn't really know what to do with them. Last Thursday, I had a much smaller stack of cards, but I knew what to do.

What is the difference between now and then? Mainly, me: My own expectations, my understanding of what an event like this is, and its purpose, have changed. A lot!

The first time I went to an event like this, I went to do business. In other words, I went there to sell my services.

Of course that didn't work! There were no buyers. There were two main categories of people there: One category were greenhorns like me, who tried to sell stuff, or advertise stuff. The other category were networkers.

Mingling events are not about selling or buying, they are about meeting interesting people. You don't sell them stuff, you talk to them. If they are interesting, and if they feel the same way about you, you set up a meeting.

"Ok, and at that meeting, I get to sell!" No! You don't! You go to the meeting to figure out a few things:


Some people are just naturally good at this. I am not. I have to study and practice. There are lots of places where you can do that, but Business Network International is my favorite. It's ordinary people helping each other out in ordinary ways. They just happen to be very good at it.
At the meeting last Thursday, I set two goals for myself:
In the beginning of this post, I told you I got one very solid lead. Here is a key point:
I got the lead from someone I have known for the better part of two years. We met through Business Network International (BNI), we became friends, and we have dinner together on an irregular but fairly frequent basis. This person has a lot of integrity, and he is very careful about recommending people. He is a highly valued friend of mine.
Most of the meetings I booked during the mingle were with people I have met before. Some are friends. Some are acquaintances. Only two were with people I haven't met before, and one of them know people I know.
Good networkers often say networking is like gardening. Now you know why: It does take time, patience, and genuine interest. Some relationships grow, others wither.
Speaking of growing relationships: Meet Alf Fyhrlund. I met Alf for the first time at the mingle. We had a brief chat, and I gave him my business card. Alf is a statistician. He does research, and he is also a consultant. I happen to know something most people don't: Statisticians can be very useful to companies and other organizations. Also, statisticians are well aware that the mere thought of statistics make most people's eyes glaze over. Thus, they are searching for, and developing, ways of making what they do easier to understand, more interesting, and easier to apply in practice.
Alf and I decided to have a cup of coffee together. We did, and I had a very interesting afternoon. Alf and I connected on Twitter and Facebook.

Another acquaintance of mine, Olle Ebbinghaus, posted a message on Facebook, saying that he wanted to talk to a statistician.
I talked to both Olle and Alf to see if they would like me to connect them. I usually don't connect people like this unless everyone has said it is OK. Both said yes. In a couple of days, I will follow up by asking them how their meeting went.
At the mingle I also talked with Anna Sigurdsson and Martin Richards, whom you can see in the first picture in this post. Martin invited me to a networking event, and I invited Anna to meet a Mystery Friend of mine. (A mystery to you, that is. Anna knows whom she is meeting, but I haven't obtained my friend's permission to use her name and picture in this post.) Anna, in return, offered to connect me with some people she knows.
Let's look at a diagram. If you follow this blog, you know there will, sooner or later, be diagrams:
During the mingle, our social networks began to reconfigure. That is, we made new acquaintances.

Before the mingle, we had several disconnected networks, like this:
During the mingle, the social networks we have begin to connect, but the really interesting stuff happens after the mingle itself. After couple of days, with some follow up work, the network looks like this:
Good networkers follow up. I have spent more time following up the mingle than I spent going to the mingle itself. So did Alf, Anna and Martin.

For simplicity's sake I have left out a bunch of stuff. For example, I didn't mention how, when I checked out Alf on the Internet, quite a few recommendations popped up. Same thing with Anna. Plenty of recommendations.
I haven't mentioned the other people I met either. A complete diagram describing the changes in my social network would take longer to draw than the two hours the event itself took. The changes are ongoing. At the time I am writing this, I haven't had all the follow-up meetings yet. I have some interesting people to meet next week. 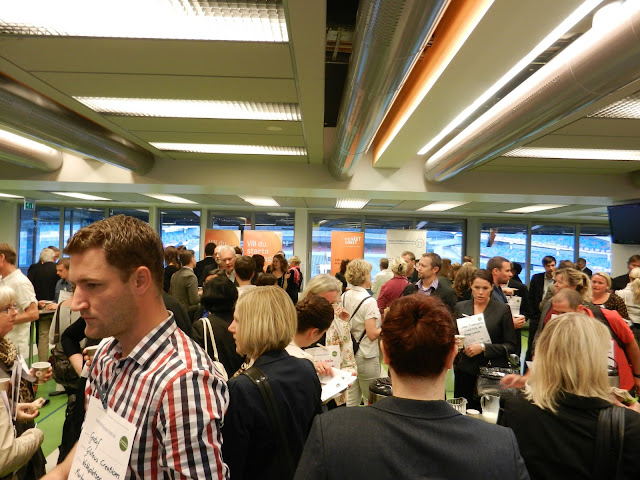 I have described only a part of how my social connections changed because of the mingle. Imagine the total number of new connections created or old ones strengthening during the event.
There is a huge amount of change going on. Most of it is short-lived, to be sure, but some of it isn't. Some of the change will be permanent. Some of the change will open up great new opportunities.
Here is a thing you might find interesting: There is an organization that organizes the mingle, sets the date, determine rules for the mingle (like: wear A4 size papers naming yourself, your company and describing your goal for the mingle), handles catering, etc.
Within that framework, the mingle is self-organizing. Nobody tells people whom to speak to, what to say, or what to do. People figure it out, it works, and it is fun.
Self-organization is interesting, because it may be the key, well, one of the keys, to building better business organizations in the future. Thus, mingling like this has an important social function that may not be obvious: It makes people more used to self-organization, which is a key to building competitive organizations today and in the future.

When people who learn to mingle like this, take what they learn, and apply it to their own work, and their own private lives, that is when the really interesting stuff will happen.