Solution To the Management Challenge

A couple of days ago I posted a management problem. Here is the solution:

The CEO brought you in to fix a sudden drop in sales. You got the following sales data:

and a time series graph based on the data table: 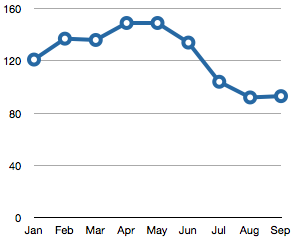 The key to solving the problem is being able to interpret the data correctly. The CEO told you there had been a rising trend in sales, followed by a disastrous drop, but is that really true?

You would not expect sales figures to be exactly the same each month. Sales figures are subject to random variation just like almost anything you measure in a business organization. The question here is whether the variation you are looking at is random or not.

I won't repeat the table, but let's look at the other charts. First the time series: 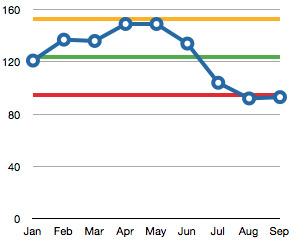 OK, we are close too, and even slightly outside the process limits. With data points this close to the limits, it is difficult to be certain. Let's look at the moving range chart: 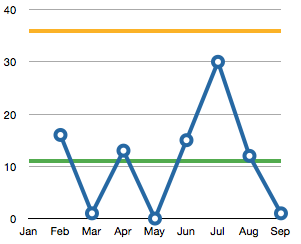 The moving range chart says we do not have a change in the system, just random variation.

At this point, we do not have a clear cut case, but the right thing to do is bet on random variation. The CEO told you there has been "the occasional hiccup" before, which may indicate that there was quite a bit of variation in sales the previous year too.

Of course, you can and should ask for the sales figures of the previous year to make sure.

Let's cut to the chase. Here is raw data for both the previous and the current year:

Here is the time series: 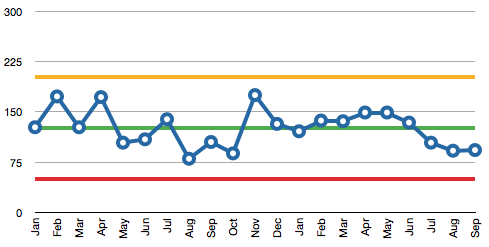 The current year does not look so special now. Let's look at the moving range chart to make sure: 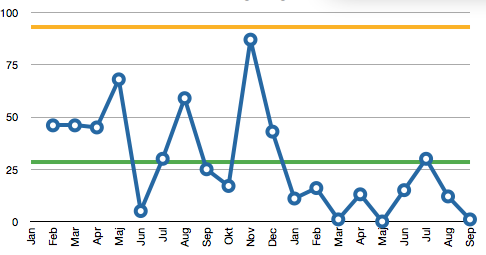 Compared to the roller coaster ride last year, the current year was positively boring. There were no systemic changes though. (This in itself is a bit strange: No seasonal variations, no other fluctuations in the market. It could be that there is a very steady market for thingamajigs, or it could be that the data was generated using a very simple computer simulation of a sales department. You pick the most likely alternative;-)

The CEO was happy with the average sales figures. What you need to do is convince the CEO that the past three months sales figures are just a run of bad luck, like the five months before were just a run of good luck. No one has done anything exceptionally good or bad in either case. At least nothing that has had a significant effect on sales. (We assume that the market has not changed significantly.)

Problems similar to the one described here occur very often. Managers interpret random variation as a sign that a process has changed in some way, and demand action, mete out punishments, or, if the company has had a bit of luck, reward people for doing exactly the same thing they have always done.  When such actions are taken they are more likely to harm than do good.

The opposite is also common, there is a significant change for the worse, but like a frog being boiled in slowly heated water, nobody notices the change until it is too late. Also, slow but consistent improvement is liable to go unnoticed.

The same kind of problem crops up very often when companies start using Key Performance Indicators of various kinds. KPIs are great, but there are two things you need to get right:


Strategy Maps, or my favorite, Intermediate Objective Maps, can help you with the former. Process control charts and EWMA charts can help you with the latter. Unfortunately, most companies don't bother. Some outsource the whole KPI development process, paying consultants to measure the wrong things and present the data in confusing ways, like the original time series diagram in this little exercise.
A better way to do it is to hire a consultant to coach you and work with yourself and your people, so that you can develop a set of KPIs you understand and trust. (You can also do it yourself, read up on the techniques and practice a lot. Being a consultant, I would much prefer it if you contact me. It is your choice though.)
You might wonder what a top rate consultant would have done if there had been a significant change. This is what I would have done:
I did not provide enough information to find specific root causes in the example, which was a tip-off that there were no root causes to be found, which in turn was a tip-off that the problem was the perception that there was a problem, not a problem with the sales process itself.
Oh, and just in case you enjoy solving management problems, here is a book full of them. (Though of course not the one I have described here.)
I intend to write more management challenges, so I'd would like your comments.
Posted by Kallokain at 02:10

Some might wonder how you arrived at the average, upper and lower process limits. Because that data is critical to the interpretation of the limited data set provided in the challenge, can you comment on how you derived those limits?

I used Donald Wheeler's approach from Understanding Variation: The Key to Managing Chaos.

I agree. Using another way of interpreting the data set might lead to different results in a particular case. Over time though, no matter which method you use (assuming the method works reasonably well), you would get better at solving many common management problems.

Wheeler's approach is a little bit different from what you might find in a Six Sigma or SPC handbook. However, I have found that it works well enough, and it is very simple to use.

From a management perspective, the important thing is to calm down and work systematically. It is worth noting that you can get the same results without doing a statistical analysis at all.

For example, you can build a qualitative synthetic model in the form of a Current Reality Tree. Random variation would show up as a contributing cause when you use the Categories of Legitimate Reservation.

I read a same topic 2 month ago. The topic helps me to improve my competency.

Apart from that, below article also is the same meaning