Awhile ago the Economist Intelligence Unit published a report named Organizational agility: How business can survive and thrive in turbulent times. Here is a quote from the preface, just so you know what the report was all about:

So far, so good, but when asked what the most important business challenge will be, about 50% of respondents answered "to drive down operating costs".

This sets up a conflict, because agility requires redundancy. Redundancy costs money. In other words, companies must spend money in order to be agile enough to make money in turbulent times.

We can express the conflict using an Evaporating Cloud (conflict resolution diagram), like this: 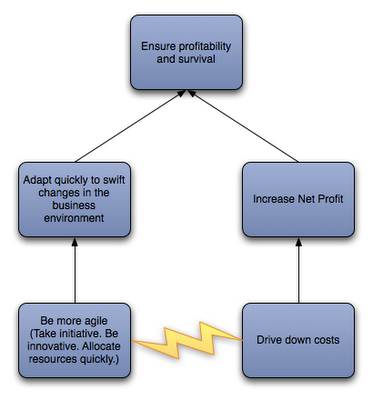 There is of course no answer to this dilemma that is always correct. In some situations, driving down operating costs is the only thing you can do, in other situations, being more agile will open up a world of possibilities. Sometimes you can do both, like Steve Jobs did when he got back at the helm of Apple. (He killed several projects that were going nowhere, which saved money, but also gave the organization focus, and enabled it to be more agile.)

In most cases, the best solution is to go for agility. Cutting costs is a defensive measure, and you won't win a fight by defense alone. Driving down costs is a viable strategy only if the money saved can be used to take the initiative and go on the offensive. It is reckless to cut cost without first exploring alternatives and exploring possible negative consequences of cost cutting, like reducing capacity at a constraint, or creating a new constraint. (Don't forget that employee morale easily can become the constraint limiting the performance of your organization.)

The agility side of the Evaporating Cloud above is about working very hard in order to make a gain. The cost cutting side is about an easy way to avoid losing net profit.

There is only one thing, really, that can induce us to take the more difficult path: Passion. Managers and executives need passion driving them to challenge themselves. Passion for what? Doesn't matter really, as long as it is a passion they can infuse in the rest of the organization. Steve Jobs has made good use of his passion for design. Richard Branson is passionate about doing and learning new things, and having fun.

Without passion, only extrinsic rewards beckon, the work of leading the organization is merely an obstacle in the way of obtaining the reward, and the preferred route to the reward is a shortcut.

For example, try to make sense of this: Every manager wants their organization to improve, but according to the survey only 17% were interested in having an improvement process. I must admit, the Evaporating cloud has me stymied: 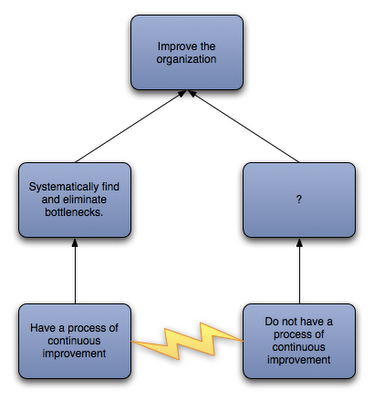 What can possibly be gained by not having an improvement process? Well, there is one thing: All serious improvement processes come with tools for doing root cause analysis. When you do a root cause analysis of a problem, you often end up identifying a policy decision as the root cause of the problem. That creates work for managers: They must fix the problem. Even worse, they must learn how to deal with the problems, for example by studying and practicing Lean, TOC, SPC, Systems Thinking, etc.

If you do not have passion, and your work is just an obstacle you must overcome in order to get your paycheck and bonus, why on Earth would you want to create more work for yourself? Of course you wouldn't.

On the other hand, if you are one of the many competent and passionate managers that do exist, if you do get serious about improvement processes, you will be the nail that sticks out. We all know what happens to that one. It is my experience that good managers often make improvements in secret, to avoid having their efforts squashed by superiors. It's a topsy turvy world:


John Boyd pointed out that most of us have the goal to "survive on our own terms". Bearing this in mind, the cloud can be redrawn like this: 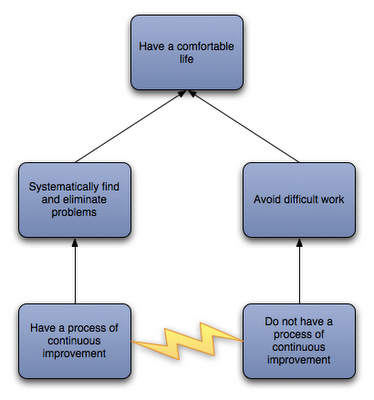 This version is a bit more cynical. I can't say I like it, but I suspect it is fairly close to the truth. If managers believe not having a process of continuous improvement will increase their personal comfort, it explains a lot.

It is of course possible to systematically break these clouds, and resolve the conflicts, but I'll save that for a future posting. For now, thinking about the conflicting desires is itself a good start.