There are many ways a relationship can go wrong, in business, and for individuals. The Accidental Adversaries systems archetype describes a common pattern, where a relationship begins with the best of intentions on both sides, but deteriorates over time. The pattern is quite complex, which makes it insidious and sometimes difficult to recognize. It looks like this: 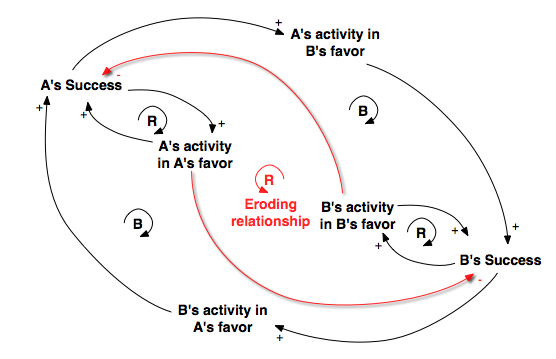 What happens is that two parties, A and B, enter a relationship for mutual benefit. In the beginning, everything looks rosy, but then A takes some action that looks perfectly reasonable from A's perspective, but creates unintended difficulties for B. B then does something to recover from the consequences, and this affects A.

One of our greatest assets work against us when we are caught in an Accidental Adversary pattern. Our brains are formidable pattern recognition engines. A human brain is also very adept at filling in unknown areas in patterns. Unless a conscious effort is made, the brain will go for the simplest explanation possible, from its own perspective. It is very easy to jump to the conclusion that the other side has some nefarious motive, when, in reality, both sides are guilty of the same thing: having a local point of view and limited range of vision and insight.

Once an unfavorable opinion (attribution error) of the other party has been formed, it can easily be cemented by confirmation bias, our tendency to interpret new data so that it confirms our current opinion. Our opinions do of course affect our behavior. If we no longer trust our ally, we are likely to take preventive measures in order to protect ourselves. The other side is then likely to interpret our actions as nefarious, which prompts them to protect themselves, turning our original attribution error into a self-fulfilling prophecy.

One way of resolving the conflict is to just let it run its course until the relationship dissolves. This is common in marriage, about one third end in divorce (in Sweden). It is also common in business. This has the advantage of not requiring anyone to make any mental effort. All people have to do is let their reptile brains take charge and react to the "evil" actions by the other side.

Emotionally satisfying as this may be, it has a couple of drawbacks. One is that it may weaken both sides, leaving them vulnerable to other dangers. Another, in my opinion the greatest, is that no one learns anything, and is liable to repeat the same mistakes in the future, with different allies.

On the other hand, if we choose to learn, choose to take positive action, and break the unfolding pattern, we will gain experience. This experience will be valuable not just because it saves the stressed relationship, but because it will help us recognize, prevent, and counter similar situations in the future.

Be prepared for a bit of stumbling on the way. You do have a good chance of succeeding though.

Of course, you can substitute whatever problem solving and project planning tools you or your organization uses. If you don't like fancy diagrams, try just talking things over with your accidental adversary. In order to succeed, you must first try.
Posted by Kallokain at 22:45