Many companies use a standard response in troubled times, they appoint a new CEO. The new CEO takes measures. If the CEO is a former sales person, he focuses on improving sales. If the CEO is a former accountant, there will be a savings program. A CEO with a technical background will focus on developing new products. The outcome is usually one of the following:
The third alternative, initial success followed by backsliding, is in many ways the most interesting outcome. First of all it is a common outcome. Second, it often seems inexplicable. The CEO proved his management genius with the initial success. Why can't the improvement be sustained? Third, the explanation model for this alternative can teach a lot about the other alternatives too.

Though the particulars may vary, the underlying causes are usually the same. Figure 1 shows what happens in a common case. A new CEO is appointed. In this example, the CEO is an experienced manager, with a strong background in sales. 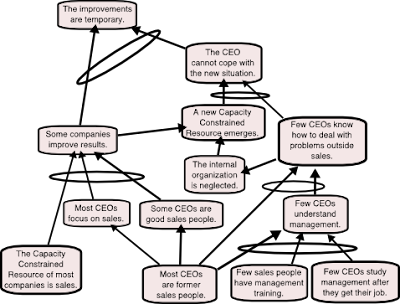 The Capacity Constrained Resource (CCR) of most companies (, about 70%, according to Gerald I. Kendall in Viable Vision: Transforming Total Sales Into Net Profits,) is in sales. to improve sales, you do not necessarily have to be a good corporate manager. All you need to be is a good sales person.

If the CEO is a former sales person, he will know what to do as long as sales is the CCR. Most likely, he will do much of the grunt work himself. This is why so many managers, CEOs or not, are so busy with sales. Sales may be the CCR, but the real reason the manager spends so much time and energy on it, is that it is the one thing he knows how to do.

Of course, if the manager has some other background, he is just as likely to continue with activities in his area of expertise. For example, bosses who are former programmers often continue to make software design decisions, or write code. (The difference is that because the initial CCR is most likely to be in sales, it is less likely that a CEO with some other background hits the CCR with his "improvement" measures. Therefore, the decline phase is likely to set in immediately.)

As long as sales really is the CCR, there will be improvement. The manager is considered brilliant, a winner. Unfortunately, if sales improves enough, a new area in the company will become the CCR. Even worse, because the CEO spent so much of his personal energy on improving sales, the rest of the company is in decline, speeding the emergence of a new CCR.

When the new CCR emerges, the CEO lacks the management knowledge to identify and correct the problem. Thus, the initial success is followed by decline. 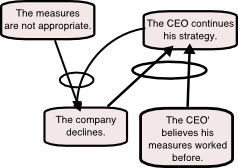 Most managers are extroverts, and have a great deal of confidence. This i not bad per sé, but it may contribute to trapping a CEO in the reinforcing loop shown in Figure 2. Well grounded confidence in an area of expertise, may easily turn into overconfidence in another. Most CEOs I have met are not given to introspection, and this makes it hard for them to discover when their own actions are becoming part of the problem. This is especially true if those same actions have led to success before.

With a sound foundation in management theory, a problem like this can be dealt with, or avoided entirely.

A CEO who knows a little bit of Systems Thinking, will recognize the problem above as a specific case of the Fixes That Fail systems archetype, and counter the problem using the recommended Systems Thinking tactics. (Which I'll leave it to you to discover if you are interested. Google a bit, or buy and read The fifth Discipline by Peter M. senge.)

Lean managers do not fall into the trap as easily, because a Value Stream Map will tell them where the problem areas in the value stream are. Once diagnosed, Lean offers plenty of simple, reliable tools to deal with almost any process problem.

Theory Of Constraints managers use buffer monitoring to find the problem areas, and the Focusing Steps to deal with them wherever they emerge.

Statistical Process Control (SPC) can alert managers to emerging problems before they become too serious to deal with, but does not offer generic solution techniques.

Early on I stated that the explanation model above offers some hints about what happens in the other common cases:

Alternative 1: Crash and burn is most likely to happen when the situation is really bad from the beginning, and management measures are totally inappropriate. Why a CEO would do something wildly off base, is explained in Figure 1.

Alternative 2: Whatever the CEO does, does not affect the CCR. The decline continues, and the CCR is fired before a new CCR emerges. (If a new CCR does emerge, there may be a sudden acceleration in the rate of decline.)

Alternative 4: The CEO is able to use generic management principles to deal with problems as they emerge. This is the steadiness of purpose and consistent drive to improve seen in successful Lean companies like Toyota.
Posted by Kallokain at 07:58