When we discuss corruption, and we do, at least in the media, the focus is nearly always on some spectacularly greedy, dishonest, and stupid act. I believe it is a good thing that this kind of corruption is exposed, but there is another, more subtle kind that worries me.


In philosophical, theological, or moral discussions, corruption is spiritual or moral impurity or deviation from an ideal.

For example, in a contest, we are expected to abide by the rules of that contest. If the judge in a football match judges in favor of the team he likes the most, because he likes it, then the judge is corrupt.

On the other hand, in a popularity contest, voting for the person you like the most is not corrupt. It is the expected behavior.

We have always had a problem with very complex contests, like political elections. Most people do not like to grapple with complex issues, so they substitute something simpler, like:


Politicians aren't exactly helping. They make a lot of speeches, but I haven't yet seen a politician use a Causal Loop, Stocks & Flow, or TLTP diagram, or anything similar. Instead, they rely on long-winded speeches, and documents so obtuse they obfuscate the issues rather than clarifying them.

Of course, politicians are like most other people, they choose their position first, then look for arguments to support their point-of-view. This is much easier than actually figuring things out, experimenting, testing, working with scientists...

There are of course exceptions to the rule among politicians, just as there are among other people. (I have actually met politicians which I judge to have integrity, honesty, a very high degree of intelligence, and who understand the issues they work on very well. It is just that they are a minority, regardless of which party they are from.)

Robert Cialdini, a professor of Psychology and Marketing has constructed a highly useful model for how and when people substitute a simple problem when they are faced with a difficult one. The Cialdini decision model looks like this: 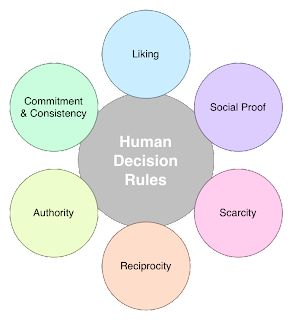 Right before writing this part of the post, I was in a discussion about the US presidential election. There was a newspaper with pictures of Obama and Romney on the front page.

My interest was in the techniques Obama and Romney use to project a certain image. For example, both Romney and Obama had their shirt sleeves rolled up to indicate they are prepared to work hard. Romney had a a tie, indicating he is at home in board rooms. Obama had no tie and the top button of the shirt unbuttoned to indicate he has a strong working class connection.

My discussion partner focused on the faces: "Obama looks a lot nicer than Romney." I also noticed she spent a lot more time looking at Obama's face than at Romney's.

This is a very good example of the Cialdini rules kicking in. Instead of discussing the policies the candidates want to implement, a quite complex issue, we substitute things our brains are good at, like decoding facial expressions.

This is not necessarily a bad thing. If you need to make a snap judgement, even a very brief look at a face can give you valuable information. However, when it comes to judging a complex issue, using a mechanism designed for snap judgements can easily lead to making the wrong decisions.

BTW, she was right. Obama looked a lot friendlier than Romney. Then again, that impression could easily be reversed simply by comparing different photos.

So, where does Facebook enter the picture? We'll, a lot of contests are run on Facebook. Since I am interested in photography, I get messages about photo contests. Of course, when my Facebook friends enter a contest of some sort, they post a message about it.

What disturbs me is that with very few exceptions, the people who enter such contests send a message encouraging others to vote for themselves, not to look at the contest and vote for the best submission. 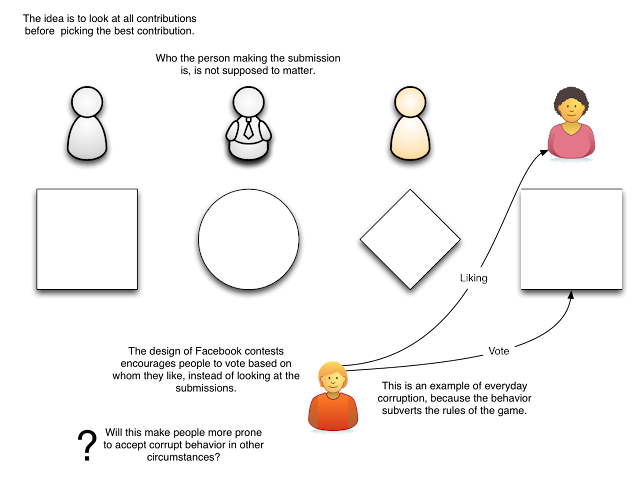 This is, by definition, corruption. For example, in a photo contest, the idea is that the best photo should win. What actually happens is that the contest turns into a popularity contest. People are admonished to look only at a single photo, and then vote.

A Facebook contest may be a trivial thing, but it teaches people to cast their vote for an alternative without even looking at the other alternatives. This bothers me.

We need in a complex world, where the things we do can have very large consequences. To survive and thrive in such a world, we need more brainpower, not less. We need more decisions to be carefully thought through, not more snap judgements.

We can't pay full attention to everything. For example, if I intend to vote in a photo contest with 10,000 submissions, I won't have time to compare all of them with each other. However, I can look at some of them, and pick the photo I think is best.

Above all, I can be mindful of my own behavior, so that I can consciously choose when to think a choice through, and when to cruise on autopilot. This is something most people can learn, and I believe social media sites could be designed to encourage that kind of self-awareness.

Imagine how the world would change if Facebook was designed to encourage people who use it to think, and to think about when they need to think. Maybe that would help us build a better future.
Posted by Kallokain at 10:41