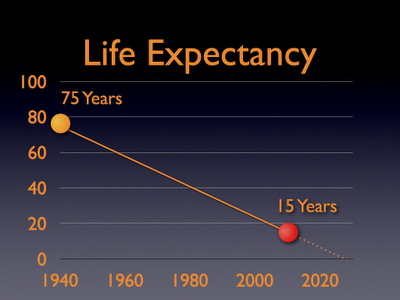 
All true. Nevertheless, this simple projection does indicate that we are heading for some serious change, one way or another.
The change may be good or bad, but it will happen. Shift happens!
If you are in the water, and a great wave comes along, two things can happen: You are crushed by it, or you surf on it.
Which would you rather do?
I am going to LESS 2011 to meet with a gang of surfers, to talk about surfing the waves of change, and to have a blast while doing it.
If you want to be a surfer to, join in at LESS 2011. If you can't be there, why not check out the people speaking there, and ask a couple of them to visit you and share what they know. About surfing the wave of change. About survival. About having fun and meaningful work.
See you there!
Posted by Kallokain at 18:16