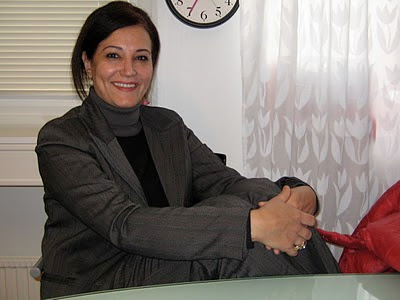 Shahin Khoshnood is a remarkable manager and leader. She was recently promoted to a higher position, but for the past few years, as area manager, she has transformed eldercare in Linnéstaden, a district in Gothenburg.
To give you a small taste: Personnel turnover is in Shahin’s district is 0%. Her unit has always managed to keep within budget. When there was not enough money for a training budget, Shahin and her people turned the problem into an opportunity, and began packaging and selling courses to raise more money.
I met with Shahin last Friday to interview her for my next book. (Please do not hold your breath while waiting for it. It is a long time project.) A friend of mine, Per Dosenius, had recommended that I should talk to her. I am very glad I did.
When I arrived, Shahin showed me to her office. The office is quite spartan. Shahin has developed a very cost conscious organization, and she leads by example.
The secret to Shahin’s success isn’t very secret. She has put the essentials on the walls of her room: Four sheets of paper that expresses her management philosophy very concisely. 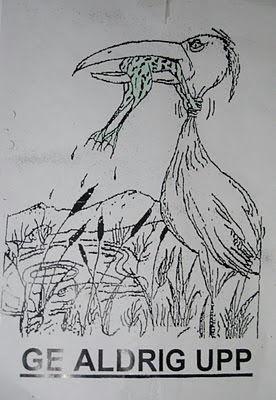 The first sheet of paper is the one you see above. The text reads Never give up.
The picture struck a chord. If you have a goal worth striving for, I mean really worth striving for, you will get into difficult situations. It will happen not just once, but over and over again. If you fight back, you will, like the frog, always have hope.
I’ll save describing the other three illustrations for the book, but I’ll tell you a little bit about Shahin’s recipe for success:
At the core is an unshakable faith in people. Since the beginning, Shahin has worked to encourage her people to take initiative and responsibility for their situation. She encourages them to think and to act, and lets them know that she is there to support them if they need it.
Shahin works by setting clear goals, and by working out intermediate objectives. That way, she says, when circumstances change, adapting plans is fairly easy.
Shahin views power as a means to an end, not a goal in itself. She makes a clear distinction between power and control. To achieve her goals, she delegates. Control over detail is traded in for power to achieve important objectives.
Shahin used to be responsible for about 50 people. There were no intermediate managers between her and people in her area. This is possible because the people who work for her know what the objectives are, and they have the skills, authority and confidence necessary to solve most problems for themselves.
With her recent promotion, the number of people working for her has doubled. Starting the 1st of January, she will have two or three unit managers. Shahin was careful to stress that they must be willing and able to work the same way she does.
As Shahin points out, when things are set up so that people are encouraged to take initiative and solve problems, managing and leading is much easier than you’d think. It is not easy in the sense that all problems disappear, far from it. But, her management style allows Shahin to focus on the things that are really important, instead of getting caught up in firefighting.
Shahin has the brainpower of her entire organization working on solving problems that would otherwise land on her table. Having goals aligned with moral convictions is also a source of tremendous strength for her, and for the entire organization.
As I listened to Shahin, I noticed the strong similarities with the philosophies of people like Ricardo Semler, Tony Hseih and Richard Branson. What they all have in common is a deep rooted faith in people and the courage to follow through on their convictions.
It was easy to understand the effect Shahin has had on her people, because when I left, I could feel it myself: A lot of energy and a desire to get going with the really important stuff.
Which is why I’ll end this blog post here. I have lots of fun things to do.
Be seeing you!
Posted by Kallokain at 10:48

would like to have some suggestion from you on my blogs.