I like my MacBook and my iPhone a lot, but there is no such thing as a perfect system. I have been experimenting a bit with network mapping lately, and it occurred to me to map how my Mac and my iPhone manage notes. The following diagram is the result: 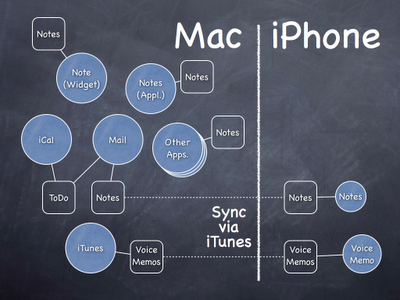 As you can see, I have ignored MobileMe. Despite this, the map is more than a little bit messy. For example, iPhone notes sync to the mail program on my MacBook. This seems more than a little bit bizarre.
There is more:
The Mac comes with a Note widget and a Notes application. Both of these are entirely separate from other notes. Notes in other programs, like Pages, Numbers, and Keynote, are also separate from everything else.
Notes and ToDo items are separate things, but it could be argued that a ToDo item is a note with a due date. If so, ToDo items should be better integrated with other notes.
Of course, a voice memo is also a kind of note, and could also be treated as a note.
Wouldn't it be nice if notes:
Suppose you had the task of designing the ultimate note system for your computer of choice, what would it look like?
I'll post my proposal in a couple of days.
Posted by Kallokain at 19:29