On the Wrong End of the Camera 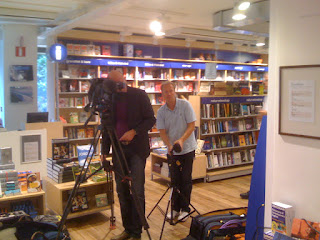 I was sitting quietly, in my favorite book café, working on my Strategic Navigation book (, only a few chapters left,) when a TV team from the Swedish Television burst in. It was a small team, but it jostled me out of describing how to create a Future Reality Tree.

Oh, gosh, I thought, they've heard of me! Finally, someone with the power of TV has decided to talk to me about management, TOC, John Boyd, Strategic Navigation, Systems Thinking, and How To Improve Life For Everyone. What a chance! 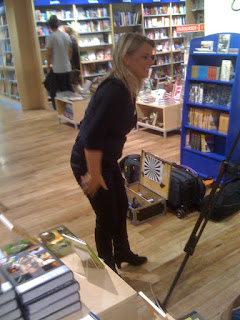 Turned out they were more interested in filming books than in filming an author. The camera remained firmly pointed in the opposite direction from me throughout their visit.

On the other hand, I think they did get some nice footage of the book café, and of the very nice people who work here. If you live in Sweden, you can see it all (except me of course) on Carin 21:30 at 21:30 on September 17th.

I did take a couple of photos with my iPhone. It's true what they say. The iPhone isn't the best camera in the world. Most of the pictures turned out a bit shaky. 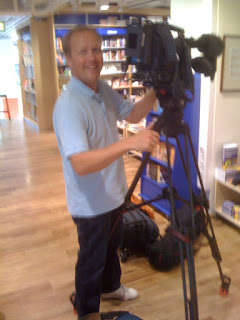 I must confess, I was mostly interested in the camera setup. I guess its natural when you do webcasts.

Speaking of being on the wrong end of the camera: I have promised to help film pair-programming tomorrow. Will tell you more about it in a couple of days.
Posted by Kallokain at 10:24