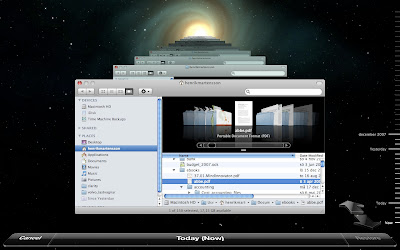 If you have read my old posts, you may recall that I was working on a book quite some time ago. I haven't had time to work on it for some time, but the project isn't dead, just comatose. I might be able to resuscitate it in January. If I anage that, I'll incorporate material on how to use interaction design and TOC busness analysis techniques to build a clear picture of what users really need.
Posted by Kallokain at 02:22

Yes, time machine is easy and invisible, and that's part of the problem: I've been using it assuming it was silently backing things up - the little spinning arrows rotate, but things hadn't been backed up properly - and i found out the hard way... what had happened was that Time Machine hadn't completed successfully because Spotlight hadn't finished indexing because ATSServer was redlining, taking 90% CPU because there were some PDF's with corrupt embedded fonts... The solution? remove the PDF's? no, just make Spotlight ignore the directory where the PDF's were, and hey presto, ATSServer cpu usage drops to zero, spotlight indexing completes, time machine backup completes. Not that any of this is obvious from any OSX help pages...