By now I am sure you have heard that Robin Williams, a brilliant actor and comedian, took his own life on August 11, 2014. His death has sparked an incredible amount of discussion and speculation about the causes. The opinions I have seen range from the incredibly stupid (he killed himself out of cowardice), to the well meaning, but wrong (he suffered from depression, which is a disease, and it killed him).

Out of all the pieces I have read about the death of Robert Williams, only one gets it right, Why Funny People Kill Themselves, by David Wong at Cracked.

However, there is more to it. Wong focuses on comedians, but the causes apply to anyone who deviates from the norm. Humans are social animals. We need other people. If we cannot connect, we get depressed.

This means depression is not in itself a disease. It is a symptom! Depression can have many different causes. There may be organic damage, a genetic disposal to a chemical imbalance, or you may be a perfectly healthy individual getting depressed because you are in an unbearable situation.

Being isolated from other people is one of the hardest things to bear.

Your default level of happiness and energy may be very high, but if you cannot build close relations with other people, you may still get depressed.

People who are smart, dedicated and principled are often shut out and isolated. Thus, they are prone to depression. There does not have to be any disease involved, no genetic or physical damage. Just isolation will do the trick.

Why do intelligent people become isolated? Neuroscientific research has showed that the human brain is designed to save energy whenever possible. Thinking requires a lot of energy. So does diligent practice.

Thinking actually triggers the pain center of the brain. No wonder solving math problems is perceived as very unpleasant by a majority of the population.

Intelligent people tend to have active brains. They delve deep into problems. They notice inconsistencies other people pass by. They come up with solutions instead of ignoring the problems. They spend many thousands of hours practicing their skills.

Most people do not want to do that. While everyone loves their results, normal people do not want to spend time with people much smarter than themselves, at work, or in their spare time. It is mentally exhausting, and actually painful. Thus, avoiding smart, dedicated, principled people becomes an autonomous response to the pain caused by the thinking, and other activities, required to keep up with them.

Thus, intelligent people will find themselves rebuffed or ignored, over and over again. They soon learn that reaching out, at work or in their own time, is to invite rejection.

Even a very resilient mind can, over time, be bent and broken by a barrage of tiny, and not so tiny, rejections.


Before you diagnose yourself with depression or low self esteem, first make sure you are not, in fact, just surrounded by assholes.

Depression is a mood, and moods are, to a large extent, dependent on our surroundings. Thus, if you are depressed, the cause is likely to be external. If not in whole, at least to a significant part.

If you are highly intelligent, and depressed, you may need smarter friends and workmates. Because you spend most of your time awake at work, finding a job with better colleagues, not necessarily with a better job description, may be your best move.

Same thing with friends. Which ones lift you up? which ones bring you down? Not to forget, take a long, hard look at yourself. Are you a positive influence in their lives? Don't assume that you are. Observe! Study your interactions.

There will be good days and bad days, but on the whole, try to create feedback loops that bring you a positive mood and the energy to do things. And, don't be afraid to let your friends help you. Your real friends will do that, just as you would help them.

Actually, helping others is one of the best ways to lift your own mood. Be a bit careful though. Some people will not understand when you are doing them a favor, or going out of your way to do a kindness.

Giving a small amount of money to a beggar will generally work. Giving serious advice on process improvement when someone asks for it is far more risky. If you do not tell people what they want to hear, or force them to think, they are liable to interpret it as hostility.

If you are a highly intelligent person, if you study and practice, and hone your skills, if you do your best to be kind and thoughtful, and yet, you are often rejected. If people like you less the more skilled you become, if they reject you when you hold on to principles you thought you shared with them, if you feel depressed by it, even to the point of wanting to end it, you may be surrounded by assholes.

Try to get a job with better colleagues. Spend more time with your true friends. If you do not have any, make more of them. Surround yourself with brilliant misfits!

I am in the process of doing just that. If you are interested in how I do it, or want to share your own experiences, please do comment on this article.
Posted by Kallokain at 18:50 7 comments: Links to this post

The Lost World – A vacation project 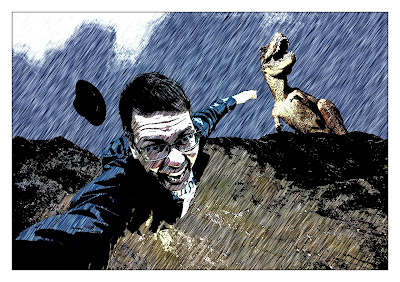 I recently had to jump head first from a cliff to escape a T-Rex. I am on vacation, and I can't stand having nothing to do, so, I decided to run a little vacation project. Because I am interested in photography, never outgrew my fascination with dinosaurs, and read the occasional comic, I decided on a Lost World photo comic project.

If you are into management, I highly recommend running a non-profit, all volonteer project now and then. Because people won't get paid in coin, you have to do something else: You have to make it interesting and educational.

You also have to find the right people: People who share your interests. Preferably people who get a bit obsessed when they are doing something interesting. They need to be creative, and learners willing to try new things. Oh, and they have to be able to work well together.

The Plan: The Lost World

When I was a child I read Sir Arthur Conan Doyle's book The Lost World (Wikipedia article) about an expedition that finds dinosaurs on an isolated mountain plateau in South america.

Writing a Lost world book would not be original enough. Making a movie would be fun, but also much too expensive. There was however another option.

One of my little hobbies, is photography. My idea was to make a Lost world photo comic. I knew it would be possible to accomplish this with a very small budget.

Putting the team together

For this project I knew I would need help. I needed to put together a team of dedicated people, willing to do a lost world project just for the fun of it.

I have spent about eight months building a loosely coupled network of photographers. When I come up with one of my over-the-top photography projects, this is where I go to recruit.

Anyone in the network can initiate any kind of event, ranging from having lunch, to launching a major project. Of course, most members are not interested in the more advanced, and time consuming projects, but with 120 members, we do have a pretty good base to recruit from.

Thus, recruiting for the project was pretty easy. I wrote a one page proposal, and published it in our Facebook group.

I also put the ad out in a couple of other forums. While a few people responded and joined, when it came down to the crunch, the people showing up where already members of the photography network. The exceptions are Lennart and Marie. Lennart is an old friend, and Marie just happened to be in a café where we held a meeting. She was interested in the project, and joined up.

We did not have the budget, nor the time, for a Hollywood movie quality project. I decided to simplify a bit. I would have liked to go with 3D dinosaurs, but we simply did not have the prerequisite 3D modelling skills.

Instead, I opted for a much simpler solution: Toy dinosaurs. The toy manufacturer Schlecht makes a line of very realistic dinosaurs. we could use them, and use digital composition to make people and dinosaurs interact.

Good as they are, close up the Schlecht dinosaurs are not quite photo realistic. It is possible to fix this by digitally adding skin, but it is very time consuming. Also, compositing people into a miniature set, or a miniature into a full scale set, is difficult and time consuming.

A simpler solution is to change the viewers expectations: A photo is expected to be realistic, but a drawing is not. Converting a photo into a drawing is a quick and easy process, so that is the route I decided to go.

Even with this simplification, we'd have plenty of challenges.

Instead, I made a plan: I layouted the entire story, as a comic, with empty panels, and brief descriptions of what was to go into each panel. I also scripted the dialogue.

This gave us a framework to work with. It also gave us a lot of flexibility. If something changes, adapting the outline is quick and easy.

We do have to schedule photo sessions, of course, but these are scheduled with rather short notice. We use a Facebook chat to discuss scheduling and other topics, and then schedule an event when we are as certain we can be that everyone needed will be able to attend.

If you are familiar with agile planning methods, you will recognize the similarities.

As of now, we have had six photo sessions, and we are more than half-way through the project. There is a lot of photo editing and compositing work to be done, but that is no problem. The priority is to get the principal photography done.
The project has begun to attract some attention, from dinosaur buffs, photographers, and also from the IHM Business School in Gothenburg. I blogged about the project there, and they asked for pictures to publish, which I of course sent them.

I still have a bit of vacation left, so now it is back to the project for me.

Posted by Kallokain at 19:06 No comments: Links to this post